A student’s paper is due halfway through the term. A construction company chief needs to file for a permit by next month. A doctor must inform a patient of test results before their next appointment. When it comes to managing your projects, a key question is: when do I need to have it done?

If nothing else, we’d all like to complete our tasks and projects on time. Or, in OmniFocus-speak, by their due date.

Due dates help us prioritize. In OmniFocus, we can look ahead in the Forecast view and see which tasks or projects are coming due soon. We can then use that information to decide what to work on today. 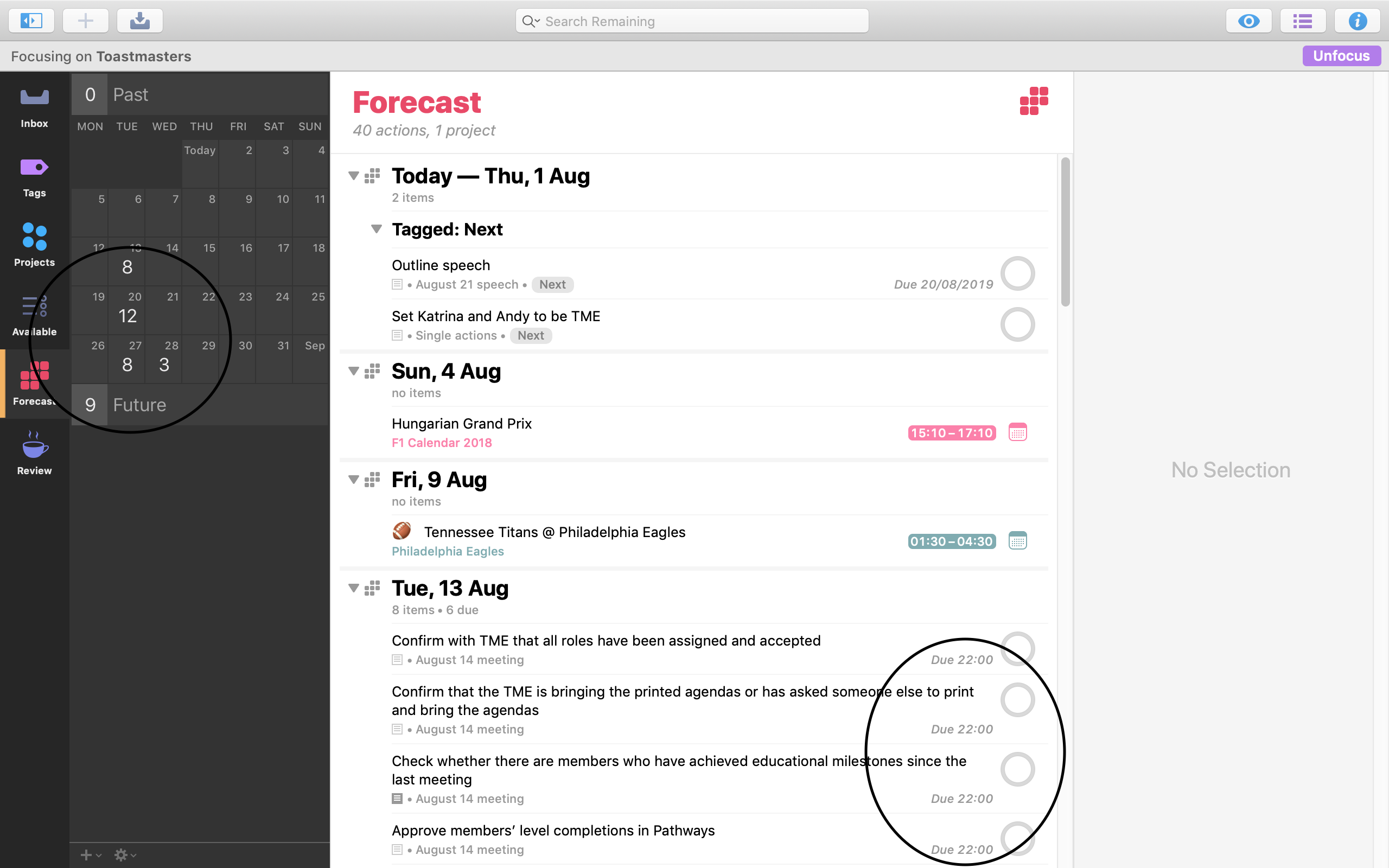 In the Forecast perspective, we can see which tasks and projects are coming due.

But some people assign due dates too readily. For what does it mean for a task to be “due?”

If a task is due at a certain time, that means there will be negative consequences if you don’t complete the task by that time.

For many tasks, you can easily imagine the consequences: don’t buy bananas today and you won’t have bananas tomorrow; neglect to wipe your sunglasses and they will have some grease spots on them next time you go out; postpone washing your bedsheets to the weekend and they will not smell fresh tonight.

Do consequences such as these merit a due date, though? By definition, tasks have consequences. That’s why they’re tasks. Not doing a task means the task won’t be done. I realize this might sound philosophical, but it’s worth hammering the point home: there are always consequences when you don’t complete a task right now.

Yet many people do assign due dates to tasks for even the slightest negative consequences. Sadly, this causes excessive worry and stress. Here’s why: 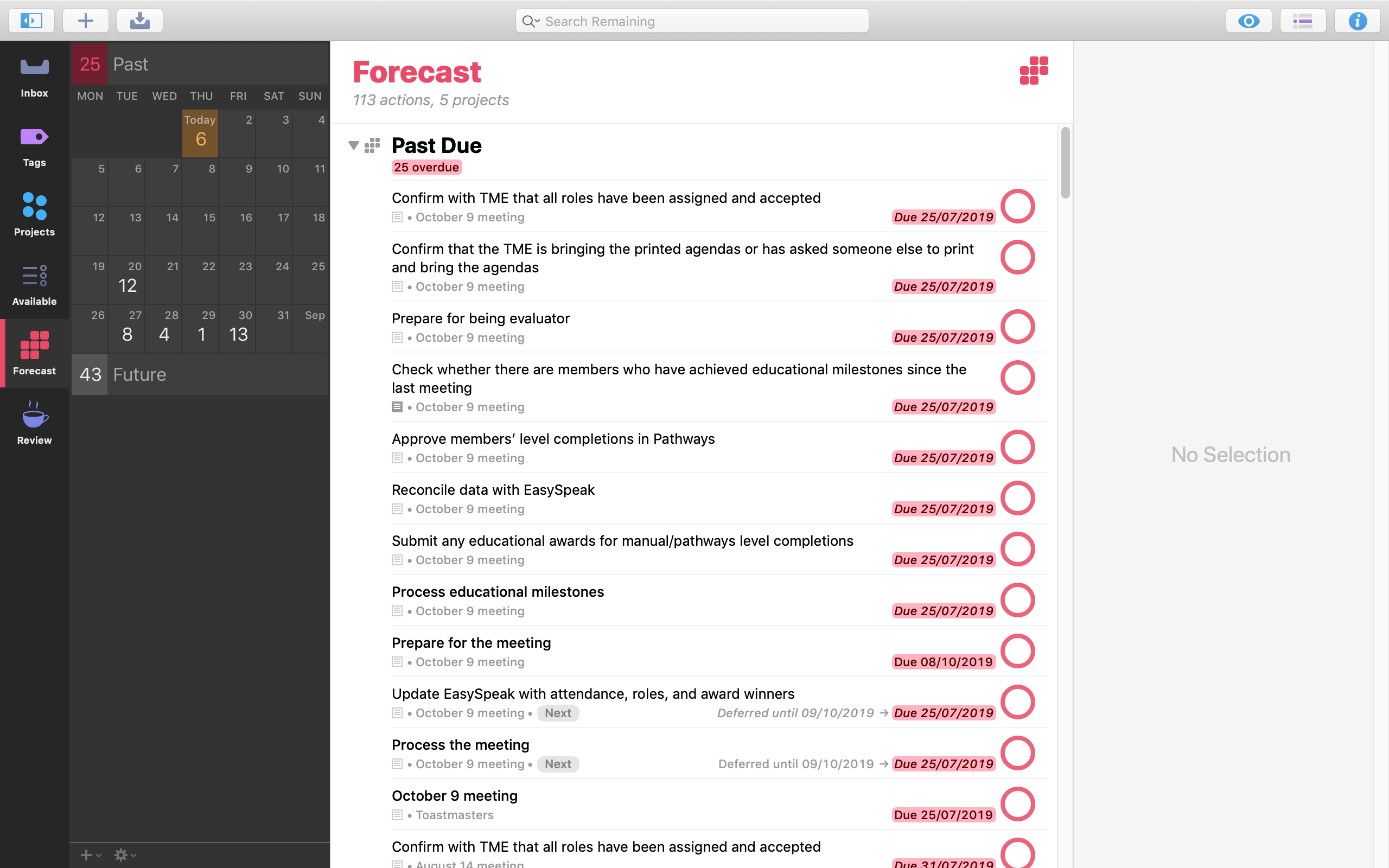 I call this “due date hell.” It is not a motivating way to start your day.

Does your OmniFocus look like the image above? I see this happen all too often to people I work with. These people want to get stuff done and want to feel in control of their projects. But they’re making a crucial OmniFocus mistake that achieves the opposite: it demotivates them and it stresses them out.

What is their mistake? They assign too many due dates.

What Due Dates Say

See, due dates are signals. They tell you to start working on a task or project by a certain time so you can have it done by the due date. It can be tempting to assign due dates to all tasks, even those with minor consequences if you don’t complete them by a certain date, just to minimize any negative results.

Unfortunately, when you assign too many due dates, you dilute their signaling effect.

Let’s say you use due dates to mark when you’d like to have a task completed. So you might want to complete 11 tasks today, and make them all due today in OmniFocus. But life happens and you “only” complete eight of those tasks. Now you’ve got three tasks that are “overdue”. You prioritized well during the day, so the three tasks you didn’t get to are the aforementioned buying bananas, wiping your sunglasses, and washing your bedsheets. You’ll survive.

The thing is, now you’ve got a big red number in OmniFocus: 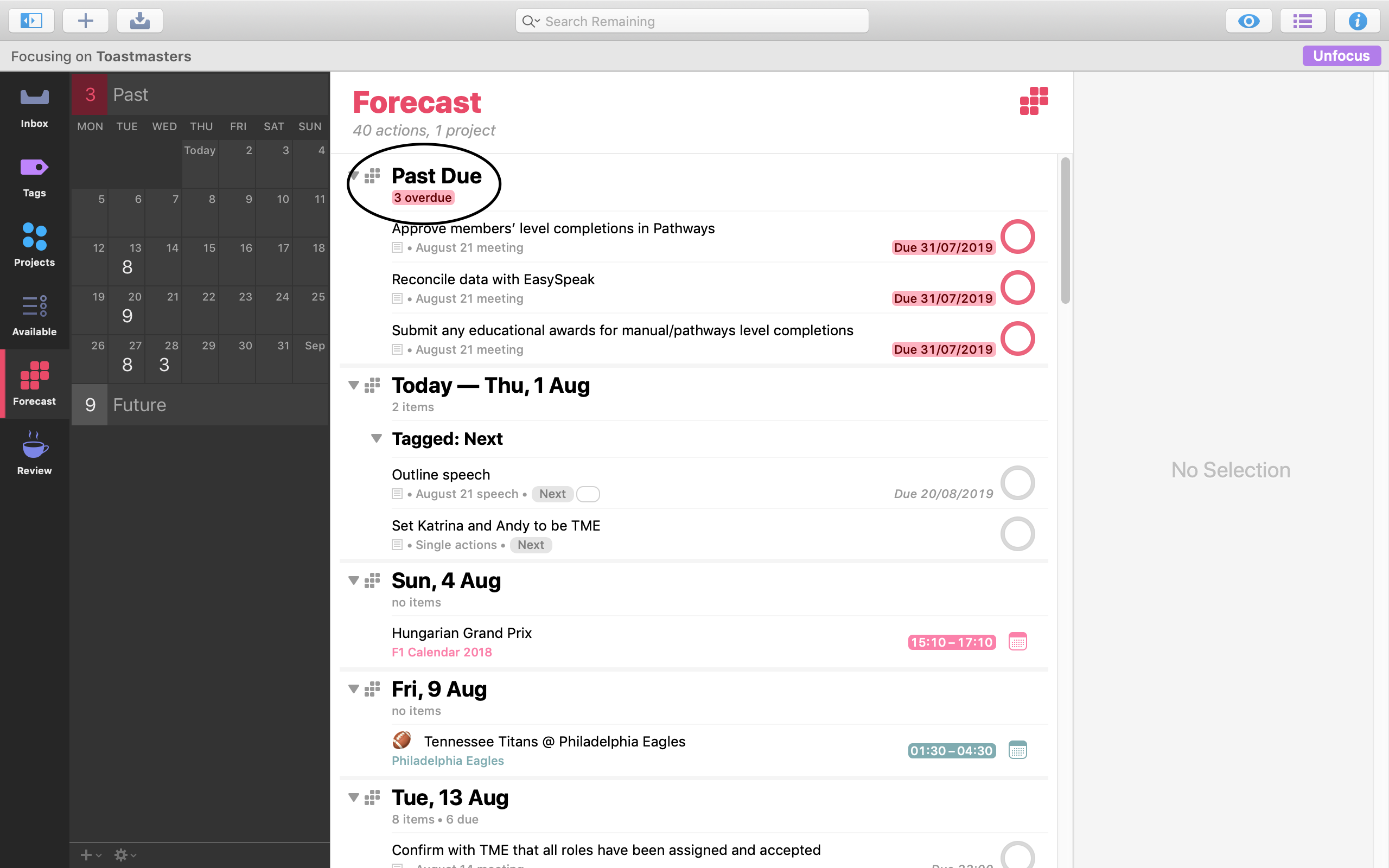 This doesn’t look so bad. But ignoring due dates can quickly lead to the “due date hell” that I showed earlier in this article.

OmniFocus is warning you that you’ve got three tasks that are overdue. OmniFocus is saying, “You had better get to these tasks soon!” But you know these tasks are of little consequence. So this is fine, right?

Letting tasks with minor consequences go “overdue” once isn’t so bad, but if you do this day after day, you might end up with dozens of overdue tasks pretty quickly. And that trains your brain to ignore due dates.

So what happens when a task comes along that has a due date for a very good reason? For example, a contract you’ve got to sign so you don’t risk losing a longtime business partner.

You might simply let that task become overdue, because that’s what you’ve trained yourself to do.

In other words: using due dates for minor consequences is counterproductive. So I propose that you only assign a due date in OmniFocus for tasks that have substantial consequences, should you not complete them by a certain time. And here’s how you might identify which tasks and projects qualify.

The Ladder of Consequences

Imagine a ladder of increasingly negative consequences, from benign to world-ending.

Near the top of the list would be tasks with almost no consequences, were you not to complete them by a certain date: if you don’t buy new pants, you’ll walk around in slightly scruffy-looking pants for a while. Big deal.

The next rung on the ladder would include tasks with mildly annoying consequences if you don’t complete them by their due date. For example, you might disappoint yourself or someone else if you don’t do a task when you said you would. Or your plants might wilt a little if you don’t water them on time.

After that, we can imagine consequences that are a little more serious. You might get a $70 fine for paying a bill late. You might forget to check in on time for your 14-hour flight, so you’re forced to choose a middle seat. Or you forget to have the revenue figures ready for an important meeting with your boss, so you look pretty incompetent.

And beyond that, we get into “seriously not fun” territory. We’re talking about tasks that, if you don’t complete them on time, would cost you or someone else serious money (e.g. forget to ship equipment to a music gig). They might hurt a friendship (for instance, forget to pay a buddy back some money he loaned you). Or these tasks might create health problems (for example, you postpone a dentist appointment for too long).

(Of course, we can imagine even worse consequences, ranging from risking prison time to starting a nuclear war. But you get the point.)

Somewhere on this ladder, you go from “that’s not the end of the world” to “okay, I don’t want that to happen.” Where on the ladder do you draw that line, though?

I propose that for all tasks and projects that are below that line on the ladder, you do not add a due date in OmniFocus.

Sure, it would be good if you could vacuum the house today. You said you would. You intended to. But if you don’t, the worst thing that’ll happen is that the floor is a bit dusty and that you’ll disappoint yourself.

Notice how I used that word intended, though?

Intentions Are Not Consequences

When it comes to assigning due dates, the difference between “I intend to do this today” and “I have to finish this today, or else…” is everything. Don’t use due dates to signify intent.

If you’d like to mark, in OmniFocus, what you plan to work on on a given day, use tags! For example, you can use a “next” tag and show tasks with that tag under Today in the Forecast Perspective (in the Pro edition). Or you could create a tag for each day of the week. You have options.

You might say: but Peter, I know which tasks have the worst consequences. I’ll see those coming and I’ll make sure that I really get those done by their due date.

So, take it easy on the due dates. Teach yourself to respect them. It’ll be less stressful, you’ll feel more in control, and you’ll be more productive.

Peter Akkies teaches people to work more productively. He created the video course How to Set Up and Use OmniFocus 3 to Get Stuff Done. You can also find him at peterakkies.net.