An Introduction to Getting Things Done®

Developed by David Allen and published in a bestselling book of the same name, Getting Things Done® became a compelling system for dealing with anything. Tasks around the house, career goals, things to buy—anything you can turn into a command to follow or action to do.

It was originally designed without a software component in mind—manila folders, actually! GTD® is a great system, but with OmniFocus, it can be even better.

You can also read the original GTD Whitepaper.

David Allen advises GTDers to do a brain dump: spend 20 to 30 minutes going through all aspects of your life, putting down anything that you need to work out in the future. Do it. It works. You’ll hit a groove after 5 minutes and end up with a pretty large collection.

Processing your Inbox is important—take time to do it right. With each item you wrote down, take a second to think about a few things:

One other thing to consider: can you do it, or does it require someone elses action? If someone else: delegate it. Send them an email right then, or create an action to “Email Brian about this one thing.”

Read more about delegation—there are many different approaches.

And then we have dates: defer dates and due dates. Dates aren’t a requirement; but dates help ensure that actions don’t fall through the cracks or beg for your attention when they don’t need it. Hooking up a defer date to an action says “I’ll hide from sight until this date.”

Which brings us to the concept of a context. A context is the tool, resource, or location—whatever is required—to get the task done. These are super-useful when combined with other features in OmniFocus, so it’s worth spending some time on them at the start.

Where do we research how to build a sailboat? Let’s try The Internet. You might be connected to the internet all day at work, but this isn’t related to work; you can make it really specific, like “Home iMac.” Some keep it simple, like iMac. And once you know which way works best, you can optimize from there.

It’s pretty common to use a spouse or a colleague as a context that you often interact with. It may seem odd to check off “Ask about moving the garden to make space for a beehive,” but you won’t forget to ask.

Processing becomes a natural habit after a while. There aren’t hard and fast rules for it, but it makes sense to clean your Inbox out regularly. Some people do it multiple times a day, others in their weekly review (we’ll get to reviews later). You’ll quickly figure out how frequently you need to clear it out, though.

Doing is easy! You just start checking things off because the capture, process, and organize phases went smoothly. Let’s assume it did, anyway.

Here’s where we combine all the good stuff from those earlier phases to do things without having to worry about anything other than the task at hand.

Reviewing is a key facet of GTD® that keeps everything going smoothly. In short, we’re periodically looking over projects and making some considerations.

The GTD Weekly Review® is just that: weekly. And it should do three big things:

Then, we’ll get current. To get current, review each project and action list. Consider these questions.

Finally, take some time to be creative. Are there any big projects on hold that you could bring up from the minors? Is there anything you’re afraid to pull out of you brain and put down on “paper?” Get it out and consider a first action.

Remember: a review is not simply clearing the dots next to each project. If something is staring back with 30 seconds of thinking versus a 1/2 second of deferring until later, spend the 30 seconds thinking of a next action or “defer until” date.

Here’s the specific stuff. OmniFocus is the best way to implement GTD on Mac and iOS.

The Inbox
The Inbox is where capture happens. Anything can go here: the more you enter, the less you’ll forget. You can type directly in the OmniFocus Inbox; hitting return twice after each new title will create another. 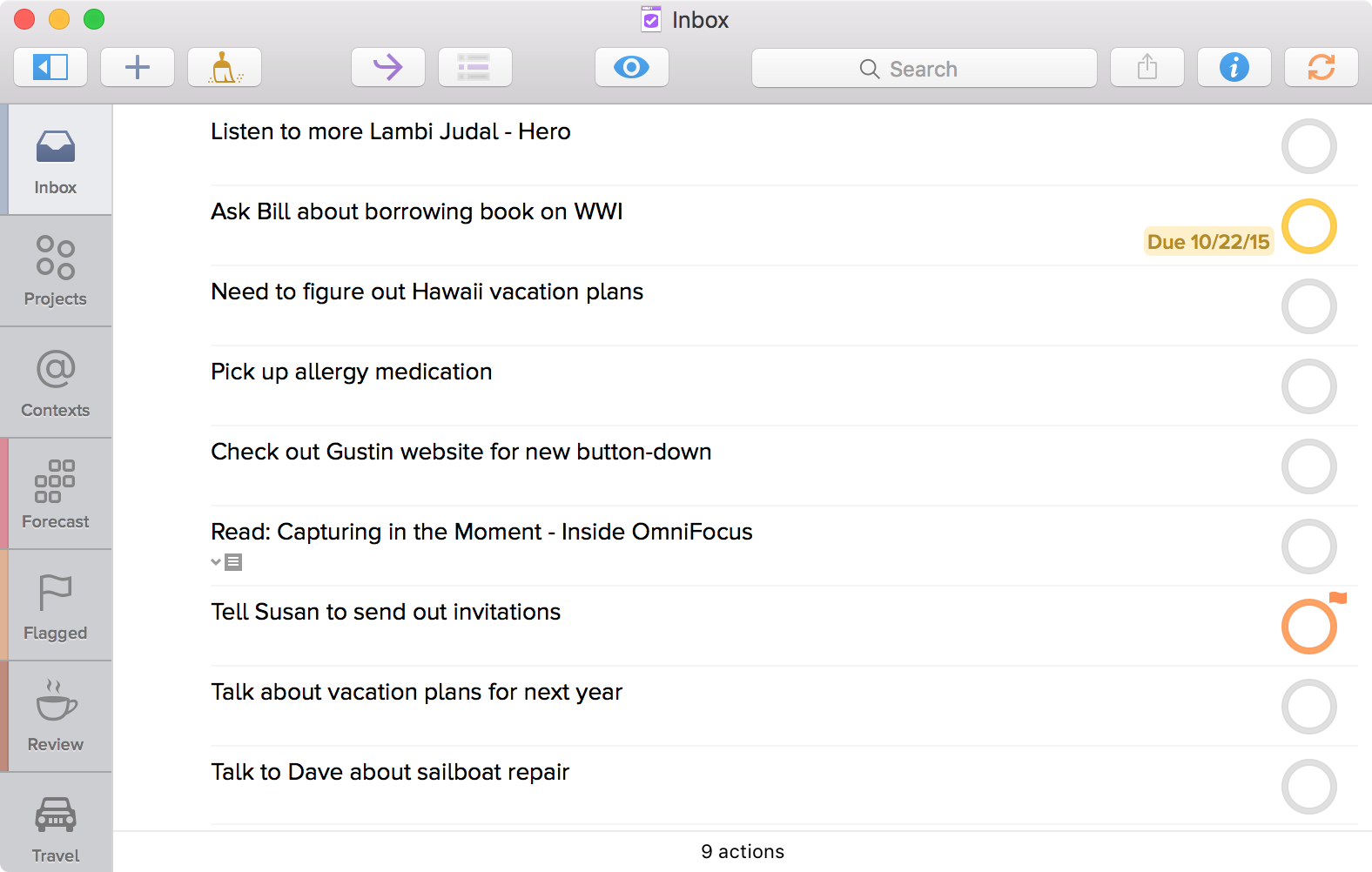 But you can also bring in text from other Mac apps. You’ll want to set up a keyboard shortcut for Clippings, which you can learn more about here.

Since many requests happen via email, a lot of mail clients include integration with many task management systems. This makes sending an action to OmniFocus—along with a link back to the original message—just a keystroke away. You can set this up for Mail.app with our Clip-o-Tron installer. For 3rd-party clients, check out MailMate or Postbox; we have a lot more listed on our email page here at Inside OmniFocus. If you’re not on a Mac most of the time—or use a web-based email client—check out Mail Drop! You can forward or send an email straight to your OmniFocus Inbox.

Finally, we have Quick Entry. This is a small window that can be called from anywhere in OS X—even in full screen apps. Just hit the keyboard shortcut you’ve assigned in OmniFocus Preferences, enter your tasks, and hit return.

Just get all of your tasks, ideas, and “stuff” into the Inbox. It doesn’t yet need to be a full thought yet—just get it in there.

Reviews are an important part of GTD®, and they’re easy in OmniFocus 2. First, just know that each project has each of these:

All projects that are waiting for review are listed in the left sidebar. 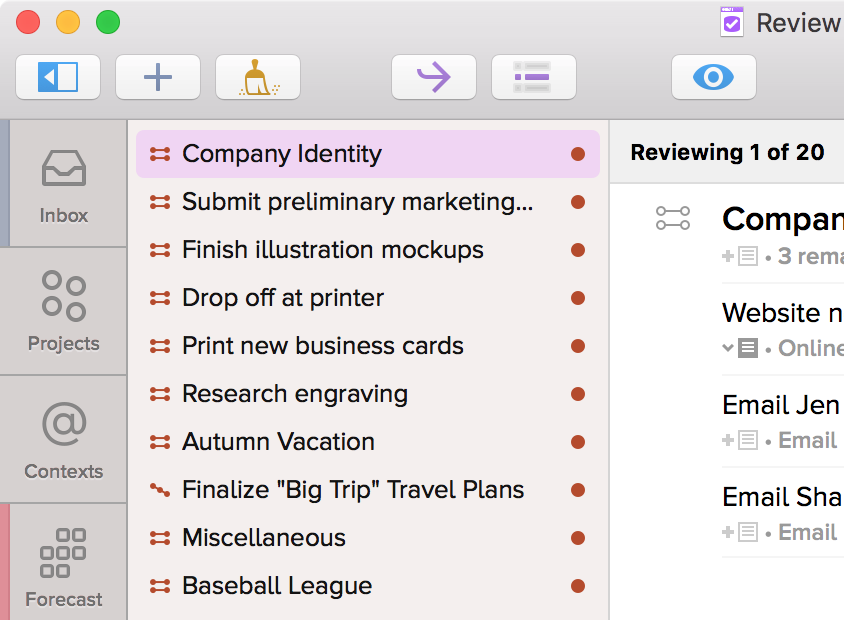 Until you’ve reviewed a project, a maroon dot will be right next to it. When you leave Review mode and come back, the sidebar will be “cleaned up” to only show the non-reviewed projects.

The Up and Down arrows move you between listed projects in the sidebar. The basic metadata for each review session is listed here. The last bit, “Mark Reviewed,” does just that. Press this button (or hit Command-Shift-R) after you’ve carefully considered the project. And consider these things about GTD® Review that were mentioned earlier.

Get a grip on the upcoming week and month with two facets—the mini calendar to the left that shows a quick idea of Big Days, and to the right, which shows the currently selected blocks of time in the minicalendar.

The Forecast view isn’t explicity GTD-oriented, though—we just collect another aspect of your life in one spot so things don’t slip through the cracks. You’ll always have hard-landscape tasks to do, and that’s why we have the calendar; knowing if you have time to do Task X before—oh, you’ve got a meeting at 4—is useful! You get a quick look at your day without heading into another app.

You can toggle specific calendars by using the View Popover in the toolbar. 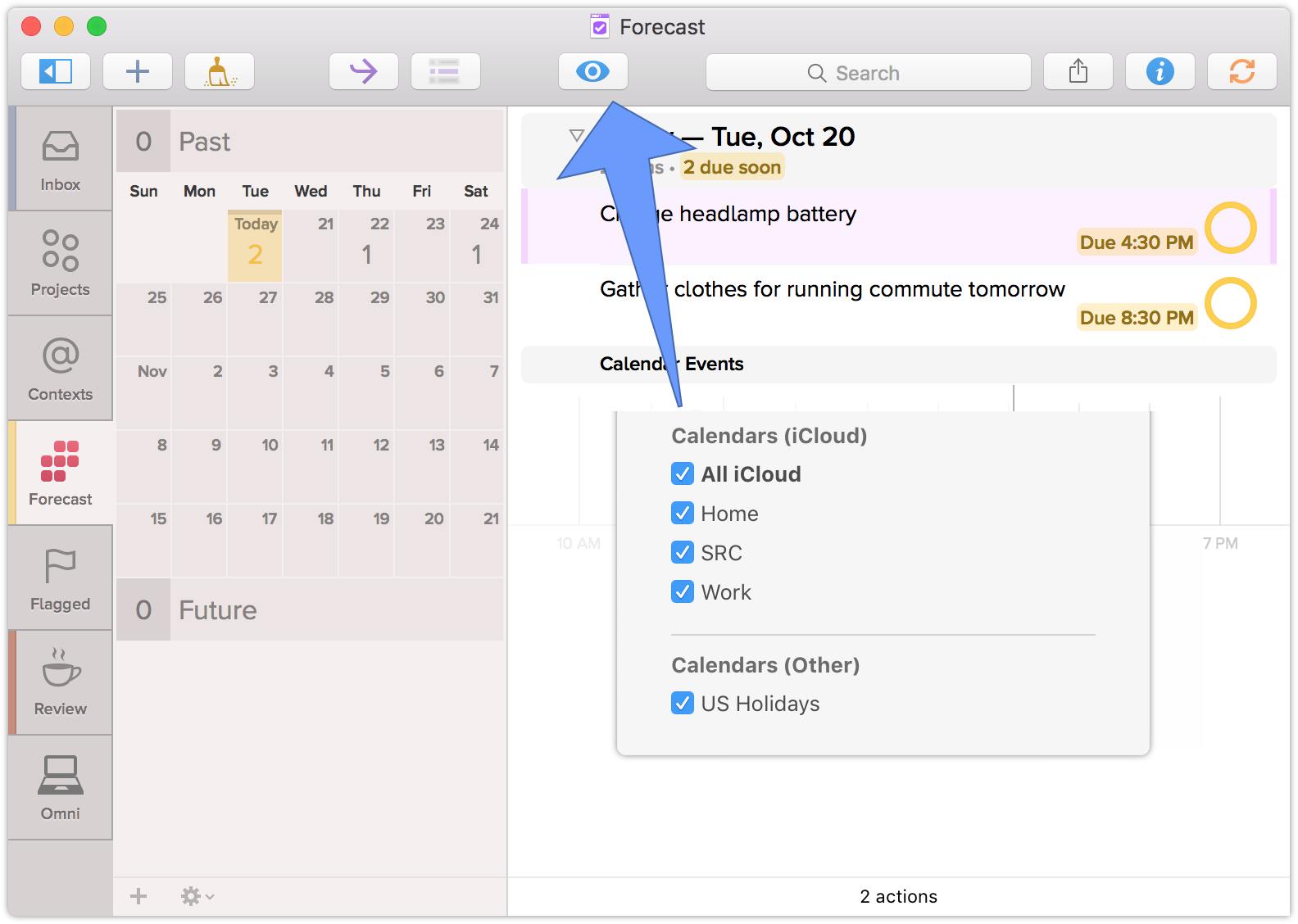 Perspectives in OmniFocus can mean a few things. They can be default views slightly modified; they can be completely customized based on folders, projects, and contexts; they can exist solely around dates. Add perspectives to the sidebar, open them in new windows, etc.

First, let’s try to define it a bit more. A perspective is any view that has specificity in any way. You can save it to reference it again later, and a lot of users perspective-fiends build their entire workflow around them. Take a look at Kourosh’s workflow. As a very basic example, we could use one of the biggest OmniFocus features, “Focus,” to create a simple perspective that excludes everything outside of work.